Storing Menstrual Blood: does it bring peace of mind or breed fear?

Have you ever thought blood from a female’s menstrual cycle goes to waste? Well, perhaps this will cease to be the case! Read below to find out more…..

Experts have expressed concern over the launch by a US company of a service for women to store their own menstrual blood.
Cryo-Cell says its bank is designed for women who want to store their own stem cells, taken from the menstrual blood, as a future health insurance. The hope is that medical advances will one day mean stem cells can be used to cure diseases such as cancer.
A UK expert accused the company of capitalising on people’s fear.
Stem cell banking
Stem cells can be obtained from numerous sources, including the blood, bone marrow and embryos.
Private companies, including Richard Branson’s Virgin Health Bank, already offer umbilical cord blood banking for about Â£1,500.
Cryo-Cell charges a sum of $499 (Â£238) for processing and a year’s storage of menstrual stem cells.
The woman is sent a “discreet” collection kit in the post, comprising a menstrual cup, collection tubes and a prepaid return shipment to Cryo-Cell.
According to the company, menstrual stem cells – which come from the womb lining shed during a woman’s period – have the advantage of being easily harvested in a painless, non-invasive manner as compared to some other stem cell sources such as bone marrow.Â And their use gets round the ethics of using stem cells taken from embryos.Â Yet like other stem cells, early lab work suggests they too have the potential to turn into many other types of cell, including heart, nerve, bone, cartilage and fat, Cryo-Cell claims.Â And they are in a plentiful supply.
Speaking on behalf of the company, stem cell expert Dr Stephen Noga, director of the Cellular Therapeutics Program, at Sinai Hospital of Baltimore, said:
“Even one menstrual cycle has the potential to produce millions of stem cells.
“Current research is very preliminary, but given their properties, we believe these menstrual stem cells demonstrate compelling promise to transform regenerative medicine in the coming years.”
Future hope
Cryo-Cell stresses on its website that “realistically, it may take several years for these menstrual stem cells to be developed into potential widely-available commercial therapies”.Â But UK stem cell experts said the scientific evidence to support their use was lacking.
Professor Peter Braude, professor of Obstetrics and Gynaecology, from London’s King’s College and Guy’s and St Thomas’ Hospital, said:
“This is all hypothesis and hype. This is such a long way off. I can see no reason why you would need to collect your own menstrual fluid.
“The thing that worries me most is that it is capitalising on people’s insecurity.”
Mercedes Walton, chairman and CEO of Cryo-Cell, said: “It’s not preying upon a fear. Stem cell science is real.
“It’s building upon our knowledge, the proven history of stem cells and upon the hope of the advancements that will come with regenerative science.”
Rebecca Rutter, operations manager for UK-based private cord blood storage facility Cells4Life, questioned how practical the service was as a source for stem cells.
“Stem cells have been identified in menstrual blood. But it is too early to tell if they are going to be therapeutically viable.
“And there is the question of how you collect a sterile sample. Under UK regulations, cell and tissue collection and storage must be done in a sterile way.”
Cryo-Cell says its patented technology to decontaminate the samples once they arrived at the lab.
The Human Tissue Authority said it had not been approached by any companies wanting to offer a similar service in the UK.

Have you ever thought blood from a female’s menstrual cycle goes to waste? Well, perhaps this will cease to be the case! Read below to find out more….. 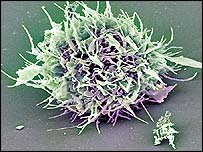