This post is all about the baobab fruit and how we will be able to buy it in the UK. It’s great! Africa get recognised and benefit from a natural produce. Many are employed. Wealth will increase. All good right? What about our carbon footprint? What about all the air miles consumed getting it to us? I’m not sure what I think of this but here’s the news from http://news.bbc.co.uk/1/hi/uk/7506997.stm anyway.

An unusual fruit from a native African tree, the baobab, is to be available in the UK after being approved by the EU.
The fruit, contained in a hard nut, has six times more vitamin C than oranges and twice as much calcium as milk.
African people have eaten the fruit for thousands of years, but Europeans will consume its pulp as an ingredient in smoothies and cereal bars.
Since 1997, foods not commonly consumed in the EU have had to be formally approved before going on sale.
The baobab tree grows throughout certain parts of Africa and has many different uses.
The leaves can be eaten as relish and the fruit dissolved in milk or water and used as a drink. The seeds also yield an edible oil and can be eaten raw or roasted.
The fruit, bark and leaves of the tree are used to treat medical problems including fevers and kidney disease.
However, EU customers will not be able to try out the many traditional uses of the tree and its fruit, which is six to eight inches (15cm to 20cm) long.
The fruit will be removed from its nut and the pulp, which is white, powdery and has a cheese-like texture, will be used as an ingredient in products such as cereal bars.

The non-profit trade association which has been lobbying for the EU approval, PhytoTrade Africa, hopes the demand for the fruit will mean employment for millions of African people.
Gus Le Breton, the association’s chief executive, said: “The EU decision is a crucial step to developing the global market which could be worth up to Â£500m a year.
“Dozens of companies have shown interest in baobab since we submitted the application and many have already conducted initial research.
“Now that approval has been given, they can progress to full-scale product development.”
The baobab tree can live for hundreds of years. Its trunk can grow up to 50ft (15m) in circumference and reach a height of 98ft (30m).
Some baobab trees, which are 80% water, are hollow and have been used as bars, shops and even prisons. 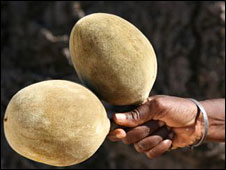